by Stuart Rolt
in THEATRE
0

BN1 Magazine is pleased to announce that On Point Theatre’s show Lock Down is the winner of our bursary for Brighton Fringe 2020. Beating off some fierce competition, this original piece of verbatim theatre was chosen due to its compelling exploration of the root causes of a rise in youth violence. The show’s research was conducted with a youth offending team, Metropolitan Police and pupil referral units, helping create a work which is both well-informed and true.

Its cast has been drawn almost exclusively from the BAME community – all being performing arts students at Leyton Sixth Form College. This compelling production charts how knife crime appears entangled with social inequality, while seeking to provide a platform for marginalised voices. As it heads to Brighton Fringe, we’ll be talking more in the coming months about this engaging play, and speaking to its director, Katy Arnell.

Knife Crime is slowly becoming acknowledged as a one of the biggest public health issues to impact the UK, and nowhere is this issue more prevalent than in London where we are from. 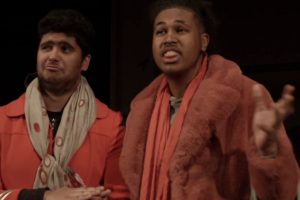 Lock Down comes to The Warren: The Hat as part of Brighton Fringe 2020

Find out more and book tickets, at: www.brightonfringe.org/whats-on/lock-down-147880

Wrap-up warm, pack a picnic and prepare to be wowed by some fantastic stage shows, as Brighton Open Air...